Well Folks Opening Quail 2017 was a Very dry one, We haven’t had rain for more than a Month now. With That Being Said, Quail Are Tough And Once It Cools Down They will be much Easier to Hunt.We Have Been Receiving Reports Of Quail Numbers Back To Average In Many Areas.One Area Not To Overlook Is The Country Around Kingman.It Seams That The Country South Of Tucson Is Spotty But There More Than Likely will Be Some Honey Holes. One Area to try would be the Mountian Ranges From Quartsite North And East.There are some areas that look very lush and the flowers are still out.look at rainlog.org for help in finding a place to hunt.With that being said if you found a nice Area Last Year It Will Most Likley Be Better This Season.

Its Still To Early To Tell For Mearns But The Grass Is Healthy and looking promising.

If You Have Pictures Of Quail Or Nice Landscapes Of Quail Country Or Your Favorite Quail Meal We Would Like To Use Them On AZQT.Feel Free To Email Us!

This Is Prime Time For Rattesnakes Be Carefull Folks………

Good Luck Out There In The Field.

WHAT DO YOU THINK?

Update: Previous Question:Last month we asked the question if the Quail Season starts to early Or Not. We had many emails with an overwhelmingly resounding Answer.

Response: Overwhelming response regarding Leaving  The Season open Until The end Of The Third Week in February. Its To Hot And The Birds Are too Young to Open In Early Oct.

This month:What Type of kennels do you Use?What do you Use To Haul Dogs Around In Your Suv Or Truck.Let Us Know The Pros And Cons.

Let us know your thoughts using the form below! We’ll summarize the comments we receive into a condensed, overall response to include in a future What’s Happening Now post.

Click Here for the What Do You Think? Archives 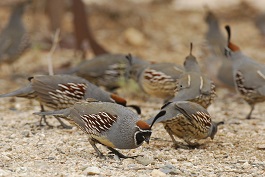 PHOENIX — Arizona hunters know that timely rainfall is the elixir that gives the state’s quail populations a much-needed boost.

Good winter precipitation particularly benefitted Gambel’s quail, the best-known and most widespread of the state’s three main species. That led to spring call counts that were almost double what they were in 2016 and higher than the average of the last 10 years (2008-2017).

Throw in statewide summer rains that sustained forage and habitat conditions, and it was a good year for quail brood survival, with some observers noting young chicks as late as mid-September.

So, where should hunters think about going when the 2017-18 season opens Friday, Oct. 6?

“Gambel’s quail are very widespread south of the Mogollon Rim, and this year should be better than it has been in a few years,” said Wade Zarlingo, small game program manager for the Arizona Game and Fish Department. “Game Management Units 44A, 44B and 20C are promising for Gambel’s quail. This area of the state is not traditionally known as a quail hotspot, even though there seems to be a significant increase in populations in this area.

“Pinal and Pima counties north of Tucson are one of the state’s traditional hotspots and, again, populations should be better than last year.”

When it comes to scaled quail, Zarlingo said Cochise and southern Graham counties should provide the best opportunities.

“Although populations should be better than last year, these populations have been affected by drought and habitat degradation from tree and shrub invasion into grassland areas,” Zarlingo said. “With a slight rebound this year, areas that were good last year should be even better.”

Meanwhile, hunters should note that the season for Mearns’ quail doesn’t begin until Dec. 8. Zarlingo said Cochise and southern Pima counties are the traditional strongholds for these birds. He encourages hunters to focus on oak-grassland or pine-grassland savannas.

For more information, visit https://www.azgfd.com/hunting/species/smallgame/quail/. Another resource for both new and experienced hunters alike is “An Introduction to Hunting Arizona’s Small Game.” Written by the department’s Randall D. Babb, the 196-page, full-color book covers where and how to hunt small game birds (like quail), squirrels, rabbits, ducks and geese. It also includes how to prepare and cook your harvest, with illustrations and recipes.

The book can be ordered for $16.95 at www.azgfd.gov/publications.

Clean the birds by cutting out the backbone and taking the head + entrails  out, leaving the full bird with the skin on.
Crush with the heal of your hand, so the birds can be sauteed in a pan.
Saute the birds in butter until lightly browned, then pour in a 1/2 cup Cream Sherry, cover and cook slowly over a low heat for ~ 20 mins.
Remove birds from the pan, add 1/4 stick more butter and bring to a boil.
Add 3 tbs of flour, and stir in to make a roue
Add ~ 1/2 cup light cream, and stir over a low heat to make a cream gravy
Add the birds back to the pan, and let simmer over a low heat for ~ 10 mins
Serve with the gravy spooned over the birds and enjoy!

A UA anesthesiologist took the next step in the development of a therapy that could delay the toxic effects of venomous snakebites.

Dr. Vance G. Nielsen hopes that once ready for humans, the therapy will be administered like an EpiPen, injected into a snakebite victim in the field to buy them valuable time to get to the hospital for anti-venom treatments

About 100 rattlesnake bites are reported in Pima County every year, he said. About 300 are reported statewide, but the true number, which includes those unreported, is estimated to be somewhere between 400 and 500.

“We call it fang to needle time, where basically it takes between, I think the standard is four hours, from the bite to getting basic lab work (done),” Nielsen said.

“The longer snakebite victims take to get to a treatment center, the greater the risk to their life or affected limb,” said Shelley Litten, a spokeswoman for the Southern Arizona Rescue Association, in an email.

“A therapy that could safely and effectively buy patients more time to reach a treatment center would be really useful for victims who live in rural areas, or for backcountry hikers,” said Litten, who is also an EMT for the volunteer group.

More Bird Hunting Tips!
Take a look at the Q5 Outdoor Products website!
and
Like them on !

Be a part of AQT and promote your business/product at the same time! With over 3,800 monthly visits to AZQuailToday.com, our site is a great way to promote your business or product while helping kids experience the outdoors, many for the first time, through Arizona Outdoor Adventures!

Have a great business or product that you’d like to promote on AQT? Contact us here and we’d be glad to provide more information!